by Molina, Isis Speaks & Bravo One 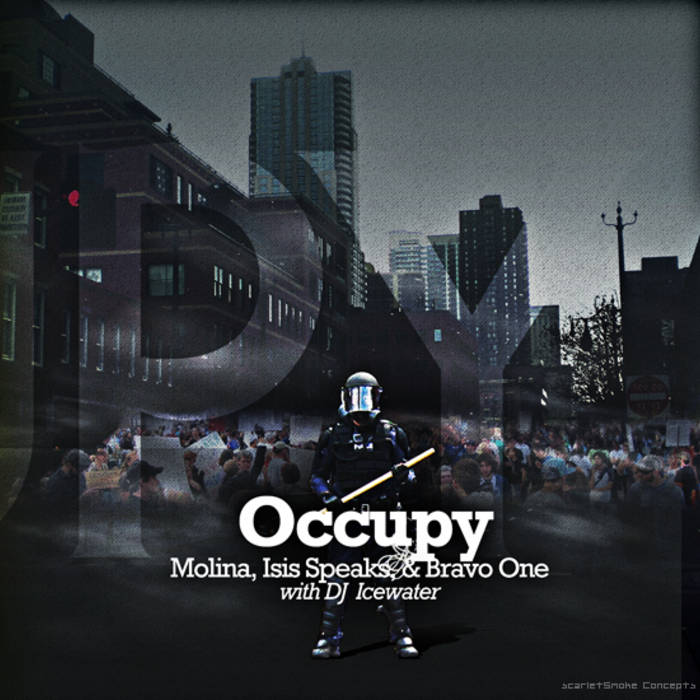 Point blank Hip-Hop is conscious, fuck the nonsense
Boycott the corporate, shit on a pop hit
I’m confident, on top of it, first class flow
Sittin’ in coach with proletariat
99s I spit, while rap clones will say any ol’ shit
To sniff coke wit the 1%
You fallacy! Priority? Minority Report…
But no ignoring me…
First in line, first responder, this “Class War”
Waged on the middle class killin’ the poor
Killin’ the youth, killin the schools for tax loopholes
30 years funnelin’ cash to the top of the class
They flippin’ the term, corporate media germ
Propaganda, what these snakes generate
Occupy the city, state, campus, and the banks
So they can hear freedom rang, Occupy everything

I strut soft with a big stick
You stagger all wrong outta time
Swagger off like tock tick
Your hammer strike aint solution based
Cowards bandana // mask grills to save faces
Keep your cause locked in glass cases
Change in stasis
You want it, take it
Back to basics
Imma rude ghal radical
Corporate black Barbie doll
A conscious queen believin’
And a dope emcee
I be better at it all than the
Mediocre rasclot
Fake fear consumers
Luke warm on the wrong block
I spit truth molten hot
like Black wall street cash keys
when the bomb dropped
I’ll file the name off your black card
I scrape digits offa sawed off
/// You wanna stand off
My occupation and your guest appearance
Clearly aint the same dog
I fight to keep my back off the wall
I am a movement

Verse III – Bravo One of One Eyed Kings

They screaming class warfare, no fair/
Spit is philosophical, I'm hip-hop's Voltaire/
It's so clear why I'm ahead of the class/
Other rappers can't see clear with their head up their ass/
What they spitting is trash/
Racks on racks on racks, but they can't dodge a federal tax (nope!)/
Uncle Sam's got a plan to keep us jammed up/
Economic hostages, holding us for ransom/
Hands up, this a stick up bitch!/
Highway robbing us, taking what belongs to us/
So we occupying Wall Street--/
And keep an eye on the beast cuz they're occupying all streets/
--monopolizing all beef McDonald's lying,
If you knew what you was buying you probably won't eat/
Don't sleep, we on the verge of revolution/
The people's movement, stay strong we gon' make it through it...

Bandcamp Daily  your guide to the world of Bandcamp